Earlier this week, Walmart made headlines when shoppers discovered that the mega-retailer had a unique Halloween section on their website. Folks looking for plus sized women’s costumes could find them under the Fat Girl Costumes tab on the Walmart page. Twitter cried fowl, the media ran with the story, and Walmart took the page down.

Meanwhile, I’m over here kicking myself for not using #Fatgirlcostumes last week when I was promoting Costumes And Curves, a plus-sized fashion show featuring fall looks and Halloween items.

I actually use fat hashtags pretty often.  Not all of us knee-jerk to horror and shame when we see or hear the word fat. I love the word fat. I’ve called myself fat for many years. I’m one of those people who believe fat is an adjective that only delivers hatred (and self-hatred) when the deliverer intends it to. Otherwise,  it’s a descriptor. It’s a noun that describes what I have on my body, or it’s an adjective that describes what my body looks like because I have that noun on my body. That’s all it has to be. Unfortunately, that’s not all it is. As Nina Bahadur said in the Huffington Post’s coverage of the Walmart story, “‘Fat girl’ still remains a derogatory label, though it shouldn’t be.”

I  believe in saying the word fat regularly. Using it neutrally and positively takes power away from those who use it otherwise. But I also understand why not everyone can hear it the way I do. In the Western world, we are socially conditioned to believe that being fat is the worst possible thing a human being can be.  If that’s true, calling someone fat is the most horrifying thing you can do to them, whether they actually are fat or not.

I got really into Halloween about a decade ago. I’d always loved the idea of Halloween, but I mostly thought costumes for fat girls were either unavailable or ugly. The first time I saw a plus-sized costume in a mainstream Halloween store, I was so excited I bought it even though I’d never in my life considered dressing as Medusa for Halloween. I probably would’ve been appalled if the store had labeled them fat girl costumes. But I am pretty sure that I said, “Yes! They have fat girl costumes!”

And there’s the thing–like so many other words and terms that have been historically problematic, calling oneself something and being called that same thing by someone else are two very different things. I know my intentions. I do not intend to be self-deprecating when I call myself fat; I intend to be accurate. When someone else does it–looking at you, Walmart employee who has still not been named–it’s hard not to default to assuming the intention is insensitive. It has been so often.

It is highly unlikely that the Fat Girl Costumes page was created by a subversive riots-not-diets fat chick who hacked the Walmart page in order to reclaim the term fat by putting it on some actually-kinda-cute-for-store-bought-costumes as a way of normalizing the word. If that had been the case, I could consider Walmart’s Fat Girl Costumes page to be the best 40th bday present anyone ever could’ve given me. My sis-in-law was the first person I got to talk to about this after seeing it on Instagram (and checking other sources to make sure it wasn’t a hoax). I told her how much I wished it would turn out to be some radical fatty pushing the limits of language by challenging the assumption that fat is always an insult. “Yeah,” she said, “but you know it’s probably not that.” Yeah. It’s probably not that.

So, the best I can do is make it that for me and the projects I am associated with.  My fat girl costumes will be labeled as such with pride. I think my Cruella Deville costume is so awesome people will note the costume itself and not my body size. But I don’t care if people see Fat Cruella Deville. (Postscript: Jesus liked my costume just fine). Halloween is supposed to be about fun and imagination. If I only imagine myself dressing as characters or categories that are normally shown as fat, I’m pretty much limited to maid (but not French maid), chef, fairy godmother, Princess Fiona and maybe inspirational speaker Matt Foley.  To that, I say, “Bah!” I’ve been everything from Fat Bag of Money (who doesn’t want a fat bag of money???) to Fat Twister. 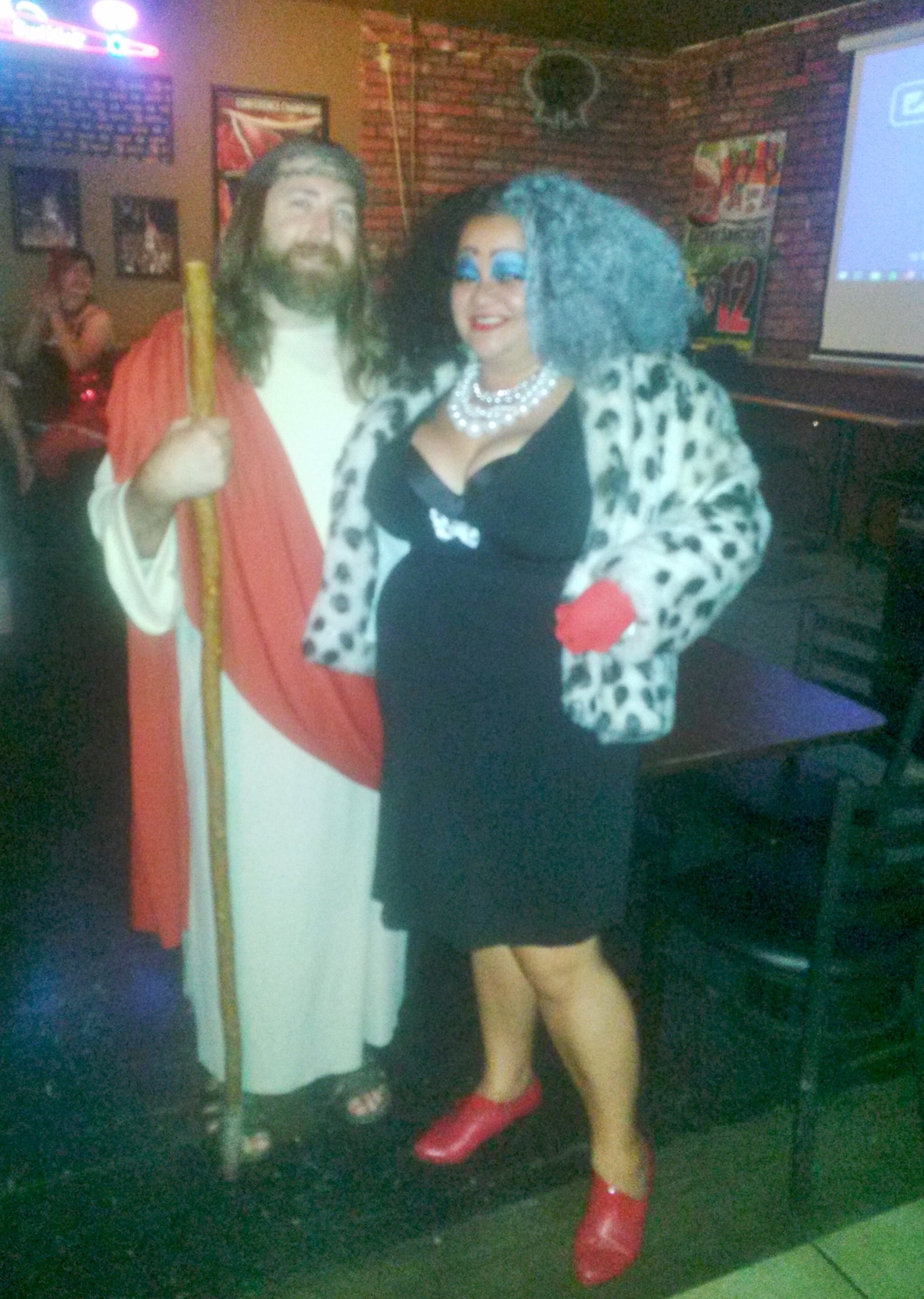 With each passing year, I get more creative. My professional life began to include Spirit Weeks which encouraged dressing up for theme days with my students. My social life included more and more theme parties and dress-up events, too. My costume love grew and grew. At the same time, mainstream costumers–like other mainstream retailers–realized that there is a lucrative market beyond size L. Still, the standard for mainstream retailers is exactly what you can see on Walmart’s site, whether you were looking at it when it was called Fat Girl Costumes or you are looking now. Halloween has grown more and more cookie-cutter “sexy” for women who wear what the fashion industry refers to as “straight sizes” (anything smaller than whatever is designated as plus at a given moment).

For me, the real tragedy of Walmart’s Fat Girl Costumes is not that some jackass decided to be “cute” by taking a cheap shot at plus-sized shoppers (just the women, though. No Fat Guy Costumes). It’s that fat girls feel limited to only the mostly uninspired b.s. premade costumes (now referred to as Women’s Plus) that are not even shown on fat girls. It also majorly sucks that those costumes almost always cost more than the smaller girl versions, even when they are produced by the same company. (Blah blah blah more expensive to produce blah blah blah nonsense. Even if a plus sized witches costume is marginally more expensive due to pattern making, fabric, whatevs, it’s not $10-20 more expensive to make, especially not if it’s the cheap piece of crap one being sold my Walmart. Those jerks just think they have a captive audience who’ll be so grateful that anymore made plus sizes that they’ll pay anything. Often true in the past, jerks, but the times they are a’changin…but I digress).

IDK about the rest of you, but I think one of the best things I can do this season is label my pics #fatgirlcostumes so when people look up the story of this stupid Walmart prank, they also get awesome BIY costumes from a fat girl who doesn’t care if anyone called her a fat girl. Please join me!  And Happy Halloween to all of you! May your days, may your days, may your days be scary and fright, and may all your trick or treat bags be the fattest thing on the block (after my Cruella costume, of course).